My mother left the cotton fields of Mississippi to rivet airplanes at Hickam Air Field during WW II. When the war ended, she returned to the States, started her life, built a career, had my brother and me, and mostly left the war in her past. Except at Christmas, when she’d wish everyone in Mississippi Mele Kalikimaka, her only throw back to her days in Hawaii. As you might imagine, the folks in Mississippi just thought she was crazy. And except on VJ Day, when she’d always get a little wistful, pull out her photo albums, and share stories of first hearing the news that the war with Japan was over.  I was a little girl then, and didn’t really understand what it all meant. I just knew that it had had a profound impact on my mother. In her final months battling Alzheimers, long after she’d forgotten my name and much of her past, she could still conjure up those stories.

Today I’m sitting at my desk, working on assignments, responding to emails, and pretty much getting on with life. Except every now and again, I look out my window and I remember. I remember spending early August 2001 in New York City, buying tickets for Broadway’s Beauty and the Beast at the TKTS booth in the lobby of the World Trade Center, and planning to return with my family for dinner at Windows on the World later that year. I remember a month later, on vacation on Kiawah Island, South Carolina, watching the TV in disbelief as the South Tower fell, then a few minutes later, so did the North one.  I don’t think I breathed that day. I sat dumbstruck and watched. I don’t think I’d ever heard of Osama bin Laden, and I remember the chills that ran through me as I saw the first grainy photo of Mohamed Atta passing through a security check-point in Portland Maine, an airport I’d flown through so many times.

As was my tradition in Kiawah, I left the rental house around 4PM for the fish market, supermarket, and vegetable stands to gather supplies for dinner. I walked their aisles, picked up items, then put them back. I think I returned to the vegetable stand twice. When I returned to our beach house, I unloaded my bags: Fruit Loops and milk for the kids, beer and chips for the adults. It was the best I could do.

The next day, my older son and I went on a kayak adventure in the marshes, an outing that had been postponed from the day before. We were the only people to show up for the tour. Just the two of us and our guide, we paddled out into the marsh in silence, just the sounds of the lapping water against the boat and the gentle breezes through the reeds to keep us company. Inexplicably, a family of dolphins joined us, two adults and three babies, and swam with us for almost two hours. The adults would pop up against the edge of the kayak and talk to us, then dart under the boat and pop up on the other side and do it again. The babies swam along side us, then would race ahead and turn, coming half way back again, as if to say “c’mon! hurry up!”   The guide, my son, and me — none of us spoke. Once again, we held our breath and we watched, this time in silent awe.

Today that son is finishing his masters in grad school, and was among the people who gathered at the White House when bin Laden was killed. He couldn’t bring himself to join in the celebratory whoops and hollers, he later t 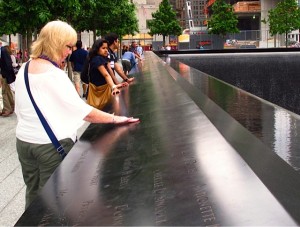 old me, but just felt he needed to be there, to bring some sense of closure to an event that had thus far defined his life. For my younger two, however, today is for them something like VJ Day was for me. It’s something that somehow defined their mom, and they know it’s incredibly important. They just didn’t live it like we did.

My younger son, now seventeen, is an intern with the Honolulu International Film Festival, and tonight he and his younger sister and I will gather at a remembrance event near the beach, where HIFF will screen the documentary 16 Acres, the story of what came next on that sacred NYC ground. The three of us have visited that ground together, seen the memorial, touched the name of my friend who was killed at the Pentagon. They’ve both heard the stories from Kiawah, and they both know that the only reason they ever have Fruit Loops in the house is because sometimes, it’s the best I can do.

Today, I look out my window and I remember. I’d like to believe that since that horrific day, we’ve done the right things, taken the right steps — both as individuals and as a nation — to make our world a bit safer. But I know better. I know we can and should do more, and do it better, with more thought to our global community and our personal rights.

But I also know that, just like my mother, we can’t forget. We can’t let it become just another day, one that the next generations don’t understand and honor. These shared experiences are our collective history, our fabric. Sometimes — when everything else seems to be failing us — maybe just keeping those memories alive is the best we can do.