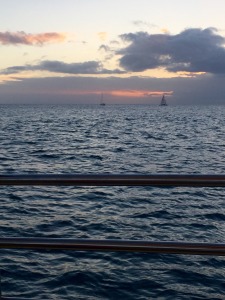 Oh Indiana, what have you done now? With your racecars and basketball and well-regarded universities, why do you need to hate?

I spent last weekend loving, not hating. While your governor and restaurant owners and politicians spewed their vitriol on national TV and radio, I celebrated my son’s 18th birthday.

We ate birthday cake for breakfast. We shopped, him sporting his new jacket and slacks like a model from the pages of GQ. We celebrated at his favorite restaurant – an old Italian spot with a wicked carbonara – where the staff fawned over him and we decorated with balloons, including a Winnie-the-Pooh one, because even at eighteen, he still loves Pooh. We watched sunset from a catamaran, him sitting with his sister on the boat’s front net, awed by whales breaching in the sun’s orange glow. Now he’s responding individually to the hundred-plus social media birthday messages he received. Most people post one over-arching thank you, but not him. He responds to each person individually, because each one took time to write to him. As the weekend came to a close, he told his sister and me that spending his birthday with us was the best gift ever.

In the Batesville Mississippi Presbyterian Church, I grew up going to Wednesday choir practice, Sunday school and services, Sunday night youth group, and vacation bible school. Reggie, the church organist, did his best to teach me to carry a tune, but mostly he taught me the magic of kindness. All the families of Batesville did their floral business at his flower shop. “You can tell Reggie did these flowers,” folks would whisper approvingly at weddings and funerals. A “confirmed bachelor,” no one ever talked about Reggie’s private life, and he had more invitations for holidays and family gatherings than he could possibly ever attend.

That’s human respect, Indiana. That’s what it looks like.

There’s an urban legend among long-time New Orleanians of the fate of two well respected locals, a man and woman – both married to others – who met their unfortunate death in a car accident a long way from home, in a place no one expected them to be. The city paper ran the stories of their untimely deaths, with the same circumstances of a tragic car accident on a lonely stretch of road, but the stories ran separately, three days apart, never connecting one to the other.

That’s privacy and decency and an understanding of the human condition, Indiana. That’s what it looks like.

My son loves his Indianapolis family, the aunt and uncle who trekked to his Adirondacks summer camp for parents weekend, taking him out to dinner and ice cream, staying for camp’s Sunday services, and replenishing his supplies before saying goodbye. He loves his cousins, whose weddings he attended and whose babies he celebrated. When that first baby cousin turned two, my son eagerly packed up his Thomas the Tank Engine wooden trains and sent them to Indianapolis, even though the little guy was still too young to play with them, and my son was a bit too young to let them go.

Over my fifty years, I’ve come to accept that things happen in this world that are really, really hard to understand. Racial bigotry and hatred in the South of my youth – how can we explain it, justify it? Genocide in the name of racial purity – it defies all sense of human decency. How do we comprehend cruel and relentless bullying of people who aren’t just like everyone else – and really, Indiana, who is just like everyone else? But of one thing I am quite certain: the God I worshipped in that Mississippi church, the one whose music Reggie played every Sunday, He doesn’t condone hatred and bigotry and evil. Granted, He and I aren’t in touch much any more, at least not in any formal church setting. Politicians like yours – equating religious freedoms with a license to hate – have driven a wedge between me and that God. But I still have faith – faith in the goodness of humans, faith in our ability to do right in the face of wrong.

Yes, Indiana, my son is gay, and he has eaten in your restaurants, shopped in your stores, and celebrated holidays among you in the warmth of family love and acceptance.

This isn’t religious freedom, Indiana. It’s plain old hatred, intolerance, injustice, and ignorance. My son knows these evil bastards when he sees them, and he knows they have nothing to do with any god he wants to know. So do I, and so do the many, many good people of Indiana you’ve embarrassed and humiliated. Look at my son, Indiana. Look at your neighbor’s son, your friends from church. Remember the folks from your past that never married but remained part of your communal fabric. Our collective world is better with them in it, don’t you think?