Ever find yourself on the road and jonesing for a home-cooked meal, in a real home, surrounded by good stories shared among friends and dirty dishes gathering by the sink as the evening winds down?

Find yourself in Paris on any given Sunday night, and that’s exactly the scene if you’re lucky enough to happen upon Jim Haynes’ garden home in a corner of the 14th arrondissement, just in time for dinner. But let him know you’re coming. There’s always a waiting list. 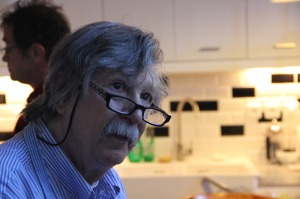 An American who’s called Paris home for over 30 years, Jim understands what happens over a meal shared with friends. And he knows travelers. “If I had my way, I would introduce everyone in the whole world to each other….Many travelers go to see things like the Tower of London, the Statue of Liberty, the Eiffel Tower and so on. I travel to see friends, even or especially those I’ve never met,” Haynes told NPR correspondent Jay Allison in 2009.

That’s how I found Jim, through the NPR story, shared among the students attending the Paris American Academy Creative Writing Workshop last July. Seriously? He hosts a weekly dinner party for strangers, 100 people or more strong in the summer? I immediately shot off my email and waited for a reply.

I didn’t have to wait long. Within the day, the kids and I were on the list.

Powell, You have three places reserved for the 8th of July. Please reconfirm on the 8th via email or telephone before 4 pm.

My nearest metro is Alesia; take exit 6 and walk straight ahead ten steps . . . . Dinner begins at 8 and ends at 11. Bring a recycled envelope (or pick one up here), write your names on the back and enclose your participation and a card if you have one. We suggest 30 Euros per person, but happily accept more (or less). Dress comfortable. No flowers, bring a big appetite. Call if you have a problem or if you cannot attend at the last minute. There is always a waiting list.

Somehow, in Paris, it didn’t seem odd making a date with a strange man to go to his home for dinner, and bring the kids. When I called to confirm that afternoon, Jim answered. “Terrific,” he said, “Do you like theatre? There’s a new show opening next week and I’m putting a group together. Get the details from me tonight.” I’d not yet met this man, and already, we were making theatre arrangements.

No surprise, really. Jim is a renaissance man whose life work has been in the arts, founding community theatres, writing books and magazines, and organizing people around these passions. “It’s a new production,” he later told me. “I want to make sure it succeeds.”

We followed his directions to the letter – “walk straight ahead ten steps and turn left,” – and concluded the man must have big feet. There was no obvious turning point at ten paces, but there was another lost soul also counting paces and looking. (Like ours, her feet were apparently smaller than our host’s.) Kindred souls on the same journey. We joined forces and walked on. Emboldened with a new friend, dinner at a stranger’s home seemed less strange. Jim’s strategy was already working.

No need, really, for instructions once in the neighborhood. The sharply dressed assortment wandering into the garden – some friends, most strangers – pointed the way. Jim sat perched on his kitchen stool, just inside the front door, greeting everyone individually, taking our envelopes, and making an introduction. Just as promised, he was, in fact, introducing everyone in the world to each other. Or at least everyone fortunate enough to find themselves at a garden party in the 14th on a light-drenched Sunday evening.

In the kitchen, massive pans of lasagna were being pulled from the oven, while a perfectly tossed salad sat nearby and fresh garlic bread was piled in the bread basket. Plates – white china plates and real flatware – were stacked to one side, and the chef plus assistant dished out dinner with gusto. Wine flowed; glasses clinked, and Jim sat as maestro of the party.

“I wasn’t sure we’d make it tonight,” he told me. “The chef was late.” That seems impossible, that this perfect meal came together late, but again, the whole evening seemed an unlikely party. Over a bowl of ice cream later that night, the evening’s chef told me the story. He had been quite late, and was panicked Jim would think less of him. It’s a difficult assignment, winning the right to prepare dinner for Jim’s guests, and our first-time chef was hoping to return again to Jim’s kitchen. If this was his accomplishment at the eleventh hour, we promised to return the night he arrived on time.

Easily over a hundred strangers mingled in Jim’s kitchen, living room, and garden. Some were regulars it seemed, popping in whenever they were in town. Others, like us, had found Jim by chance, and were relishing this first-time experience. A couple of grade-school age kids played about the garden as their parents mingled, while the oldest in the crowd, patriarchs easily in their late 80s, held court under the large trees.

With food and drink secured, we settled on a bench outside the kitchen, where we met a couple from Brooklyn, also first-timers at Jim’s soiree. We’d just been in Brooklyn, so conversation quickly turned to favorite restaurants, mutual friends, and our future Paris plans. New friends quickly made, we invited them to our apartment a few days later for a gathering of writer friends; turns out our Brooklyn native is also a writer and actor. We saw them several more times before our travels took us in other directions, and we’ve stayed in touch ever since. Introducing the world, a few people at a time. Jim seems to be on to something.

We’re back in Paris this July. You can be sure we’ll be back at Jim’s again, this time as a few of the old-timers. Won’t you join us?

(Note: This story was first published in 2012 on Travelati, a glorious but now sadly defunct travel ‘zine.)